The attached YouTube video is of one of my favorite songs, "Fareweel Regality." It's a bittersweet song of good-bye, with a hope of consolation "on some golden autumn morn or when July is hazing Dipton Slopes." Then, "we'll live and spend the day" again.

Thank you for all your love and support. Peace and love gan with ye.

Today was Pentecost. The youth dedicated their stained glass project. All finished. And it only took three years! 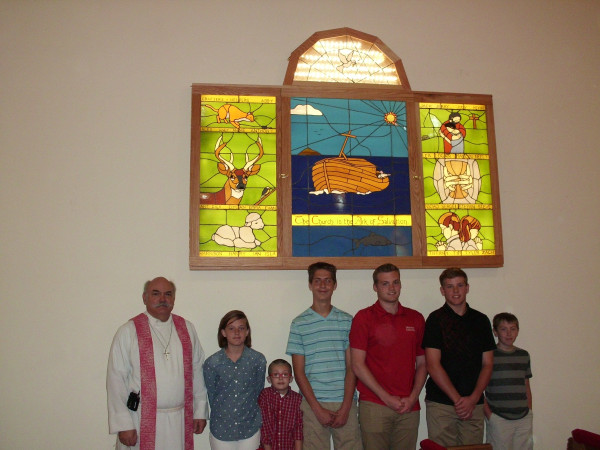 Twenty-one youth and nine adults took part, one way or another, in designing and crafting this project. Funds came from a gift by Tammie Lawrence in memory of her mother, Peggy Ragle. Design was done by these three boys, seen here from their confirmation class three years ago. Yep, three pre-teen boys got this going. This is the prayer we used at the dedication, taken from the words of Sir Francis Drake:

Lord God, when you call your servants to endeavor any great matter,
grant us also to know that it is not the beginning,
but the continuing of the same, until it be thoroughly finished,
which yields the true glory;
through him who, for the finishing of your work, laid down his life for us,
our Redeemer, Jesus Christ. Amen.

A couple dozen youth and adults met at EFUMC this morning for doughnuts and devotions. We then spread out across town to do work for families needing a little extra help. This is following up the success of our three-day missions day camp last summer.

We met back at the church for lunch, then fanned out again to finish up the day's projects. 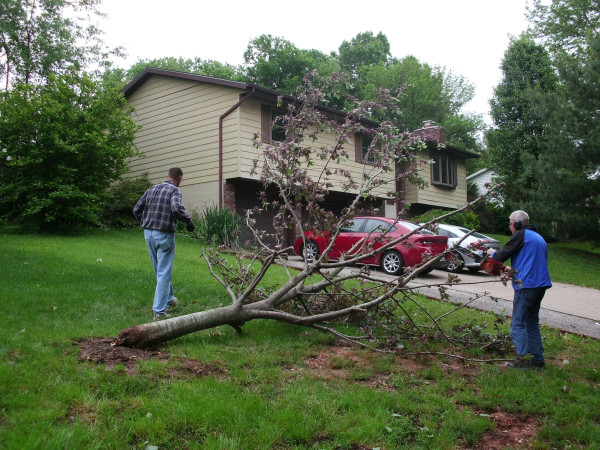 Cleaning up storm damage
Lots of downed trees around town. Quick work with a chainsaw. Pulling some weeds
Several folks needed help with yardwork. It's been very wet, so yards and gardens have gotten out of control, and some of our people aren't able to keep up. Run it up the flagpole and see who salutes it
Mava wanted her flagpole painted.

Cub Pack 129 held its annual Blue and Gold Banquet in Rogers Hall this evening. Tacos were on the menu again this year. Prior to the meal, however, all the Cubs and families and guests gathered in the sanctuary to see the Arrows of Light Den cross over to Boy Scouting. These young men have completed the Cub Scout journey, and they are ready for more and bigger adventures. Most will be joining Troop 119 forthwith; one plans to join Troop 121; at least one is unsure if he will continue on the Upward Trail. Arrows of Light Crossing Over

I did a rough count of those gathered in the sanctuary to see these boys cross over, as well as the other Cubs receive their Whittlin' Chips and Bobcat badges and other awards. All told, we had at least 77 people in the sanctuary for the Crossover ceremony. Counting the people in the kitchen downstairs, there were at least 80 in attendance tonight. That's a lot of people -- and a lot of kids -- that our congregation touches. Later on, I spoke with several people about various things, including at least one very deep conversation with a mom who wants her son to do the God and Me program with me. This is serious Christian Education, serious missionary work. For some of the kids in our Scouting programs, we tell them as much about God as they know. Before the ceremony, one of the Cubs, a fourth grader whom I taught knife safety to last week, looked at me with new respect. "You're a pastor?!" he said. Yes, I'm the pastor of this church. Then, looking at my uniform (which I wasn't wearing last week) he said, "And you're a Boy Scout?!" His eyes shone. 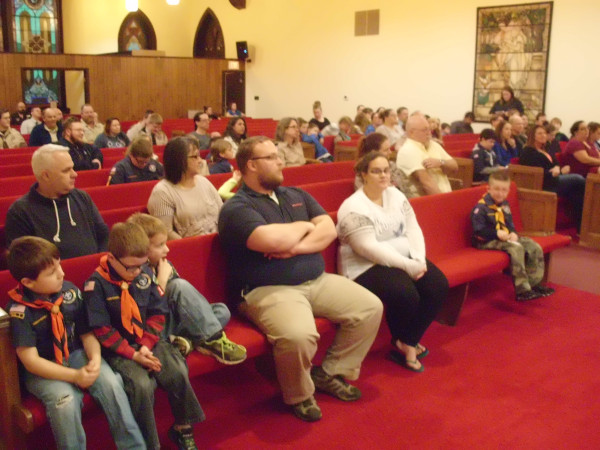 Our congregation was well represented at the Blue and Gold/Crossover. We have a number of volunteers and parents involved in our three BSA units. Though I always wish for more, even those who aren't directly involved in Scouting already. It takes all of us to welcome new people, to provide a different kind of bridge for the Scouts and their families to cross over, into new relationships, where our pride in these boys -- and their siblings, and their parents is expressed. All evangelism is relational. It's not enough to bring 'em in, somebody's gotta meet 'em there.

So that's what we do. We welcome those who come through our doors. And teach them about God. And about honor. And talk with their families about the challenge of raising kids in this crazy world. And challenge all of them to take the next step in their relationship with God and in their discipleship. This evening, the newly crossed-over Arrows Den were straining to get at the tacos, and I said, "We gotta pray first." Then, I turned to these 10-year-old boys and said, "You know, if you're so eager to get started, would one of you like to pray so we can start?" Austin immediately volunteered. And so rather than me saying grace, one of the Scouts led everybody in prayer. Just like he did it all the time.

Good job, Austin. Good job, everybody. I am so very proud of you all.

We had a great Scout Sunday service at EFUMC today. Cub Scouts served as acolytes. Boy Scouts served as ushers and greeters. Venturers served as liturgist and communion servers. We had the 2017 Scout Sunday patch from NAUMS to give to all the boys and girls in uniform today, and we took up a special offering for the NAUMS Bible Fund.

After worship, we had Scouts and Scouters serving goodies in Rogers Hall for fellowship time. Scouts made s'mores. We had some Danger Cookies (ginger-cayenne cookies, extra strength) left over from the Winter Rendezvous to share. It was wonderful to have so many kids in church!

We also recognized two long-time Scouters from our congregation for their contributions to our ministry with the Cross and Flame Award. Glenn Hargitt earned his Eagle as a boy in Washington State. After leaving the military, he raised his children here in Ellettsville and served as an Assistant Scoutmaster when his son was earning his Eagle. When his grandson crossed over from Cubs to Boy Scouts some years ago, he registered again, this time as Troop Treasurer. He just stepped down last year. He has been a good role model and a faithful servant for EFUMC and for all our Scouts for many years. Kara Nichols came to our congregation when her eldest son was a Cub Scout. All three of her boys have been Scouts with us. Two have completed their Eagle and are now Venturers. For the last several years, Kara has served as our Local Church Coordinator of Scouting Ministry (and as BSA Charter Partner Rep), working with all our Boy Scout and Girl Scout units. She is also an Associate Advisor in our OA lodge, working with our Chapter unit elections team. 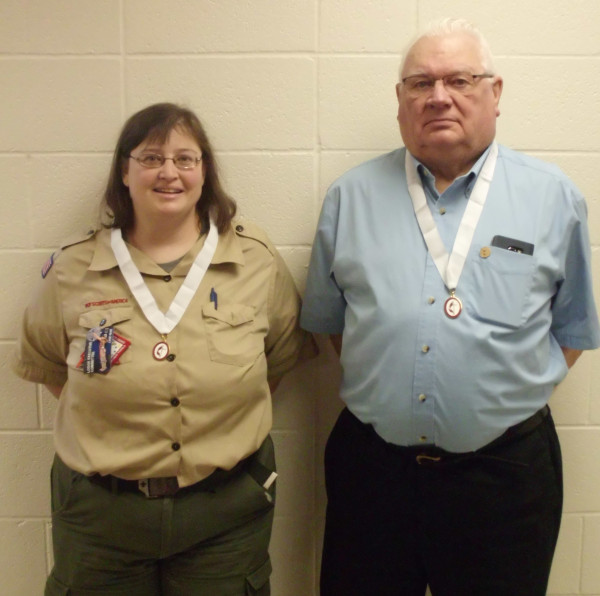 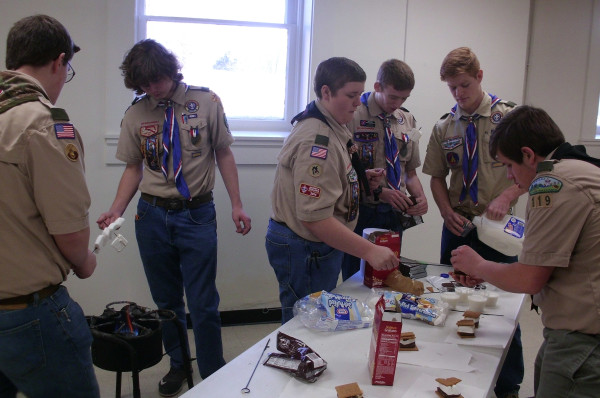 Making S'mores
Children, do not try this at home; we are professionals This Sunday is Scout Sunday at EFUMC. Cub Pack 129, Boy Scout Troop 119, and Venturing Crew 119 will all take part in the service and help with the fellowship time afterwards. There will also be some special recognitions during the service.

The sermon will be from Isaiah 6:1-10. The sermon title: A Taste of Fire. We will celebrate Holy Communion.

You are cordially invited to share the morning with us. Worship is at 9:30 a.m. Fellowship time follows immediately thereafter, and Sunday School takes up about 11:00 a.m. or so.

Our happy Crew met today and worked on calendar items. Here's what we're up to. All youth (boys and girls) ages 14-20 are welcome to be part of Crew 119.

March 5 Meeting at EFUMC 1:00 p.m. Gearing up for backpacking.

My newsletter column for February

To assist in this, I will be leading a short-term class on Making Disciples during Sunday School, beginning January 29, 2017. Judy Carl asked me to sub in the Adult class for a few weeks, so I’m taking the opportunity to get my licks in on this vital topic.

Everybody in the congregation knows that I have a doctoral degree. Some people call me “Dr. Collins” as a matter of respect. Me, I tell people I have an ornamental doctorate, since my actual degree is not related to pastoral ministry or theology. Those folks who assume that I have either a Doctor of Ministry (DMin) or Doctor of Divinity (DD) or something like that are in error. My actual degree is a PhD in Secondary Education: Curriculum and Instruction. You see, once upon a time, I thought I would like to teach Christian Education in a seminary. When any such job failed to materialize, I was led back to the pastorate.

My concern, then and now, was not just to be a good maker of disciples myself, but to teach others how to do it. To teach congregations how to organize it. To teach clergy how to guide it. You all have seen me lead retreats, organize church camps, teach confirmation classes, work with our Scout units, lead mission trips. I have a passion to teach the faith. But I am not able to do these things because I’m just so personally awesome or something. You can learn how to do this stuff. I grew up a church orphan and had to learn all this. You can, too. And we need more people doing it than just the pastor for the church to thrive and to succeed in its pursuit of the Main Thing.

So this will be the what this short-term class will explore. f you are interested in this topic, please join us. The outline of the course is as follows. Sunday School follows Fellowship Time each Sunday at around 11:00 (or whenever we can pull people away from the coffee pot).

It was a short night here at EFUMC. We had a beautiful service of candle-lighting and holy communion last night. The sanctuary was circled by worshipers greeting the coming of our king. This morning, we gathered again to offer our praise to our Lord Jesus. 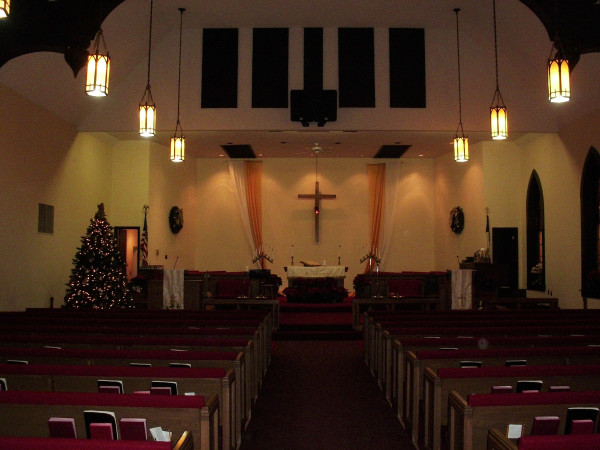 Happy birthday, Jesus!
A carrot cake for Jesus, by request 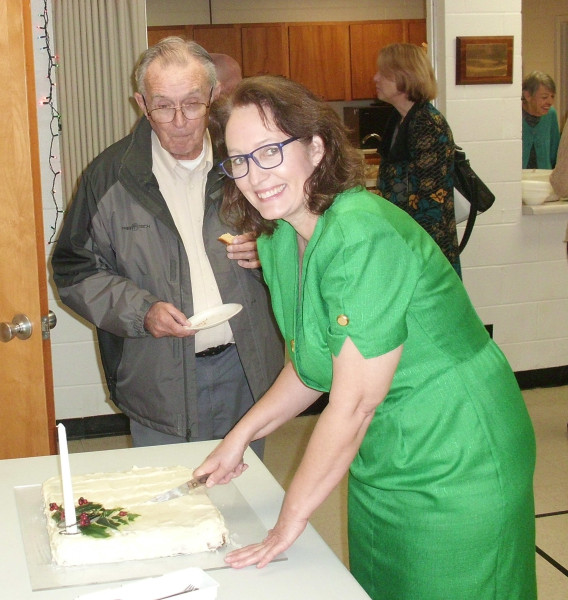 Welcome, new members!
K.C. and Bonnie get to cut the cake

We had a nice gathering in worship this morning. Lots of presents under the Christmas tree for families in need in the community; after the service, the Missions Committee gathered them up to deliver them. The Choir had a fantastic cantata last week, and shared one of the pieces from that this morning. And three more speakers shared their Christmas messages for our Festival of Preaching.

We have had women and men, youth and young adults, all speaking in place of the pastor's regular sermon for three of the four Sundays in Advent. It has been a blessing to us all. Everyone has a story to tell or an insight from God to share. Asking people to share their stories and insights helps develop leadership in them, but it also builds up the congregation. I've been at this long enough to know that, important as the pastor's preaching ministry is, the ministry of calling forth the talents and wisdom of the congregation is equally important. Thank you T.J. Nichols, Dan Rogers, Bonnie Bickel, Evan Oldham, Jerry Pittsford, Tammie Lawrence, Neely Slabaugh, Laurie Samuelson, and Dan Rarey, for your witness. You have informed, delighted, and moved us all.

Saturday night is our Christmas Eve Service of Candle-lighting and Holy Communion at 11:00 p.m. This is always a high point in the year. You are welcome to join us.

Sunday morning, Christmas Day, worship will be at 9:30 a.m. There will be a big birthday cake for Jesus during fellowship time. Your humble servant will preach the Christmas sermon. No Sunday School on this day.

How great our Joy!
Collapse